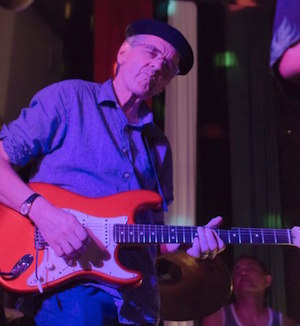 I currently play guitar with the Melbourne Reggae-Dub band – Pressure Drop. I formed that band with others in 1978 after moving on from a reggae band (the first in Australia) called The Flying Saucers. I moved back to Melbourne and reconstructed that band as Pressure Drop.

The band was one of the early pioneers of rock steady, reggae and dub in Australia and was popular around the live music scene in Melbourne in the late 1970s and early 1980s. The band had a large following across the city and down the surf coast and offered a new sound to the dance and soul crowd in Melbourne.

By the early 1980s the band was experimenting with live dub using on-stage echo chambers and mixing techniques that were new to the Melbourne scene. Those sounds still sound contemporary today.

In addition to Pressure Drop I am working on a number of studio projects in collaborations with other players. As time permits, I will make the outputs of all these efforts available here.

The following video is to accompany the our release - Take Me Higher - (release date for iTunes store April 8, 2016).

This work is licensed under a Creative Commons Attribution-Non Commercial 4.0 International License.